All show and no go... my daily | Bonus: old school(ish) Accord wagon build

Joined Jan 7, 2015
·
185 Posts
Accord build looks sweet. Would EGT sensor be better at the collector? Not familiar with its intended use besides the obvious "look at exhaust gas temperature". Nice lil trick with fixing the CF hood btw. Might try that on my buddies, mines painted except the vents so no worries about that.
► Show Full Signature
Youtube Channel: https://www.youtube.com/channel/UC8c1A3cRpvaPN3oQWbLXsoA
Instagram: https://www.instagram.com/moll._.man/?hl=en
Integra (stolen/stripped): http://www.clubintegra.com/board/showthread.php?t=62306
RSX: http://forums.clubrsx.com/showthread.php?t=1082729&highlight=

MollMan said:
Accord build looks sweet. Would EGT sensor be better at the collector? Not familiar with its intended use besides the obvious "look at exhaust gas temperature". Nice lil trick with fixing the CF hood btw. Might try that on my buddies, mines painted except the vents so no worries about that.
Click to expand...

EGT can be used as a tuning tool on the dyno, as a partner to a wideband. There's a nice, simplified, explanation of it at Honda-Tech, here.

As far as placement goes, right off the head flange is best to get a more accurate reading of what's coming out of the cylinder. I don't want to fork out the money for four, which would be ideal, and cyl #3 is typically the hottest.
A

Joined Sep 26, 2012
·
1,875 Posts
Ramble post, just thinking out loud here, but I may have found the right color for that engine bay in the wagon. I was wanting a light color, since it'll make working on the engine easier, reflecting light and all that. "Battleship grey" is popular, and looks like it'd be pretty timeless. But then I remembered Toyota has been using some nice... I don't know if I'd call them earth tones, but they're pretty neutral looking colors in a simple gloss. No metallic flake or anything to spice them up, just nice and flat. I've been seeing some Scion tCs around in a 'battleship gray,' as well as Tacomas in an interesting desert-camo kind of brown. Quicksand, they call it, paint code 4V6. I dig it, and I think it'll go well against the dark blue the exterior will eventually receive...

It's too cold out to paint the traction bar now, but I think in the Spring I'll get that done. Tan bay, traction bar, and rear crossmember + rear engine mount. Explicit Speed also make a one-piece, three-point strut tower bar for the car that I'd also paint tan - if I don't sooner learn to weld and just fabricate my own. I think the engine sitting in there, incased in a Quicksand tan cage, would look pretty sweet...

:shakehead This is what I do, haha. I daydream about the finer details of this build that won't be complete for years and years (so thorough are my plans), but it keeps my interest up.

After some cold, snowy days finally passed, I got those LCAs on. The six bolts were a bitch to figure out because it seems no one, online or locally, has flange bolts in Honda's spec. I settled for hex bolts that have to be clocked just right to be able to get a socket around. The undercoating on the cross member was also peeling, so both to prevent rust and match my front control arms, I painted it silver. I don't think it looks bad at all, and it even makes the red sway bar stand out more. I know S2's bushings are known to crack, but these are the only arms I like the look of, so I ordered a full set of spares to keep on hand just in case. 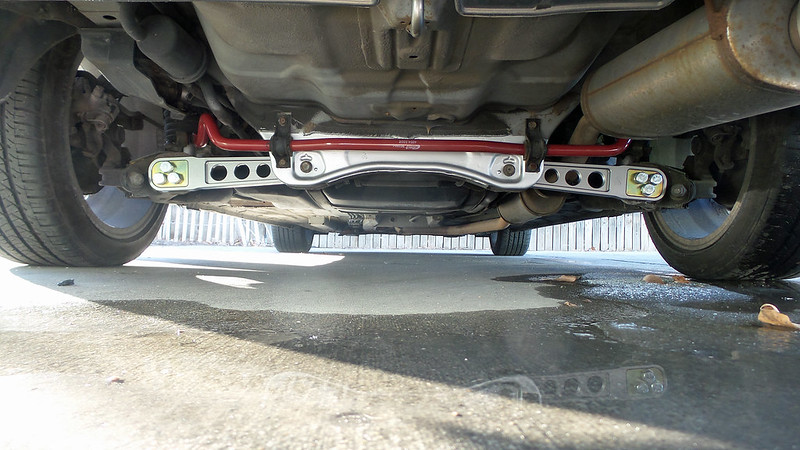 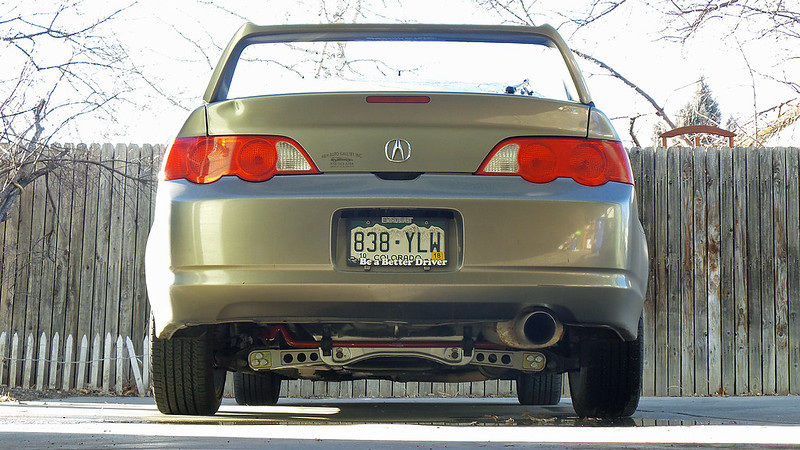 Spent $50 at the junkyard and went home with these babies. They were both equally disgusting, so you can see what just $10 or so worth of cleaner is accomplishing. Should have the driver seat done today. I need to look into the swap again, but I'm hoping I can just transfer my '02 airbags over and not have to worry about SRS system issues... 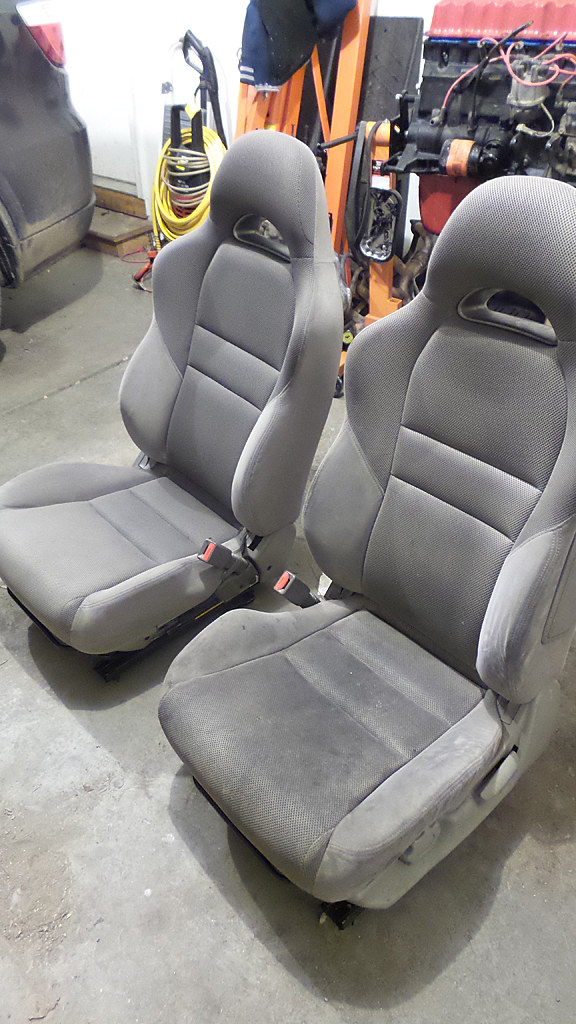 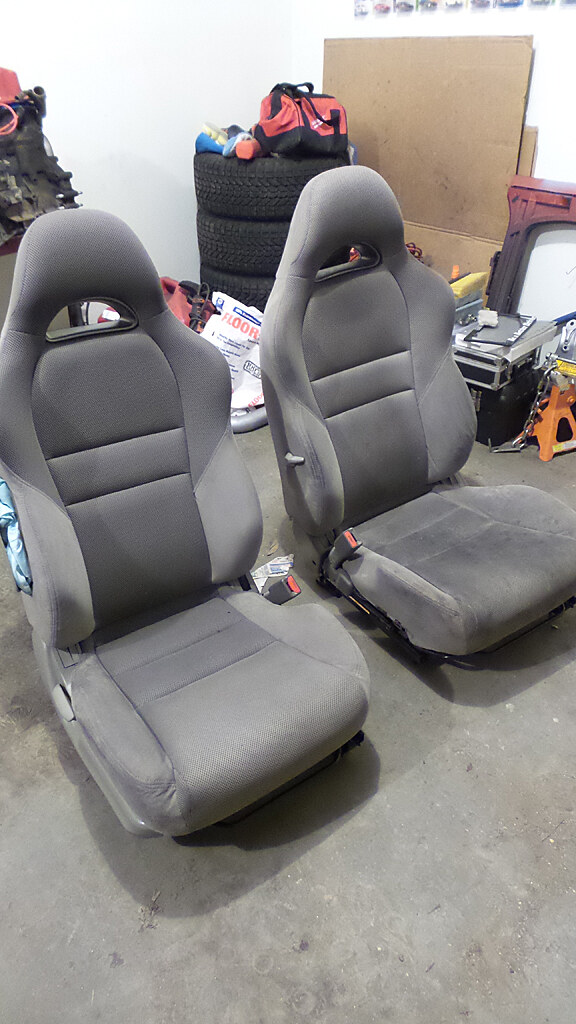 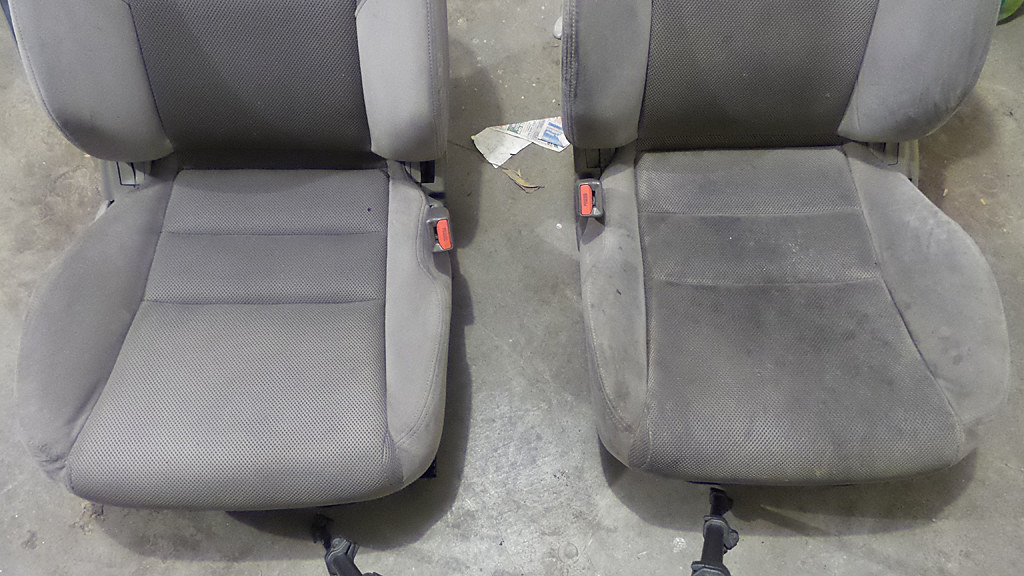 The second-best part? They both fit in the trunk while blocking nothing of the rear-view. The Mugen bar had to be dropped, but the sub still worked for the drive home! God, I love this car. 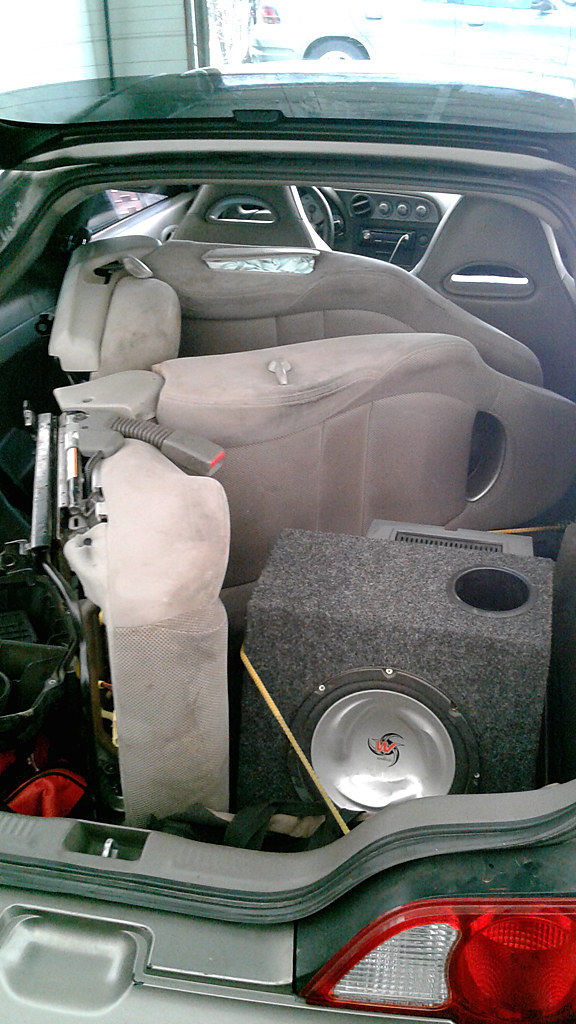 I can get that for you

Joined Sep 26, 2012
·
1,875 Posts
Thanks. I've got some serious driving planned this summer, so for those into scenic photos there will be plenty more. And I just noticed there were some spectacular drives that I posted in other threads but not in here. I'll have to get those up.


This first one is on Pikes Peak, on my way down from watching the 100th anniversary event in 2016:


These are some more local roads:


I finally took off that A-spec rep lip. I only put it on for a test fit, then got lazy and it ended up staying on for something like six months. But now I'm waiting for the car's color change to bother painting it:

One day I just went for a drive out of boredom, and took a highway up to Estes Park I'd never driven. It turned out to be the more beautiful of the two highways leading from my area but it's nice that I have two very different options for going up there, canyon vs mostly valley.

If you've ever seen the movie, The Shining, this is the Stanley Hotel it took place at:


Elk just chill in peoples' yards in this town. My own city is right off the foothills, so we even get them down here every now and then.

A little while later, I dragged a couple friends up to drive it again:

Finally got the 2005 seats installed. I can't honestly say if they're any more comfortable, because my back is wrecked anyway. It's definitely nice having a head rest I can actually rest my head on while driving and still have my eyes pointing forward, though. The downside to that is that you have to make sure the passenger seat isn't blocking your rear quarter window, because these do create a bigger blind spot.

With how nice these look compared to the shape of my old leathers, they have me wanting to replace the shabby steering wheel even more than before. I'm slowly making this car new again... 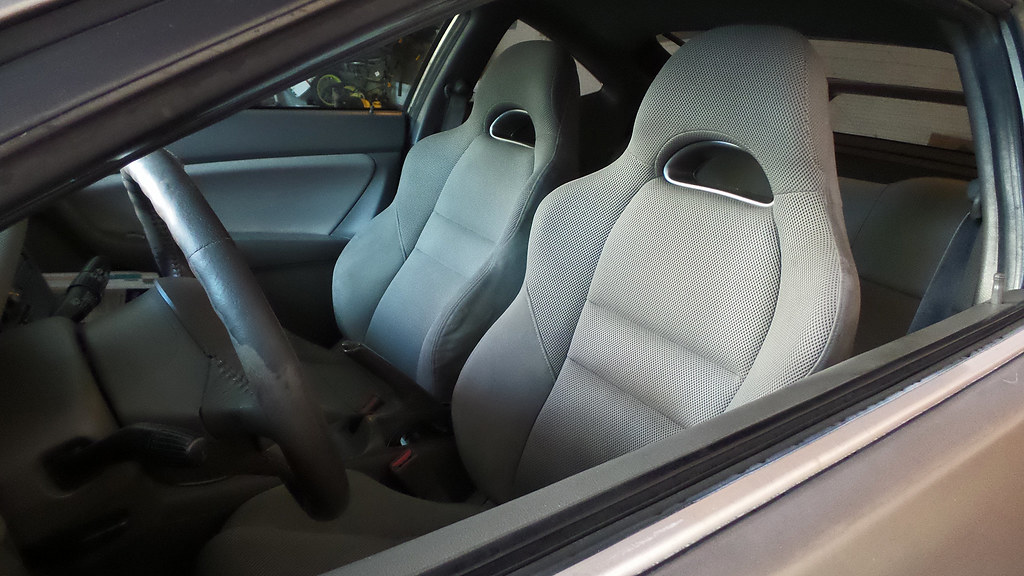 Well, some serious shit's happened in the home life in the last month or so and it's got the build on hold. Still trying to be shopping for a wagon by the end of the summer, though... provided the right one shows up for sale. I can't likely take short-notice vacation time off work, so looking too far afield for a chassis isn't going to work.

But anyway, a month and a half ago, I dropped some things off to be powder coated - and what a birthday gift! They went a couple weeks over the "month" I was quoted (even though I told them on day one that there's no rush, no deadline), so they felt bad and gave it to me for free. I kinda feel bad about not paying, but it's not like I won't have a ton more parts to coat later on. I'm sure that's what they were hoping for anyway. We got as close as we could to Toyota's Quicksand color, which the bay will eventually be matched to. The car will be built to drive, first and foremost, but I've been going to car shows since I was a kid and would love to have something worth showing myself one day. The bay will be clean. That said, parts to be colored tan were chosen very carefully:

- Only the rear of the engine mounts, since it's the only one that bolts to the chassis. Rear subframe will be made tan when I get it. The other mounts will be silver to match the trans/engine they mount to - the plastic timing covers will be painted silver to simplify and clean up that side.

- Most of the ESP traction bar. I'm thinking that I'll like having all of the car's suspension arms, knuckles, etc coated this color as a nice contrast to the black underside of the unibody, so I went beyond just the bar itself and had the radius rods coated. The interior of this dark blue wagon will be custom-upholstered tan, so the tan suspension pieces should all flow nicely. The top mount for the torque strut sits against the engine, so that will be silver. I left the torque strut itself polished because I can't imagine it looking right if it were any other color. A tan torque strut would make it look like the engine bay was propping up the engine, and anything else would stand out in some other ugly way.

- The oil pan... more 'just because.' It used to be a metallic orange, because I thought I was going to get Bisi cam gears and thought that would make for a cool matching accent. I guess I could have gone silver, but I think that wouldn't have looked right. Imagining a look from under the car, I think this will look best. I spent a full hour reapplying the DEI heat tape, trying to have it lay as smooth as possible. 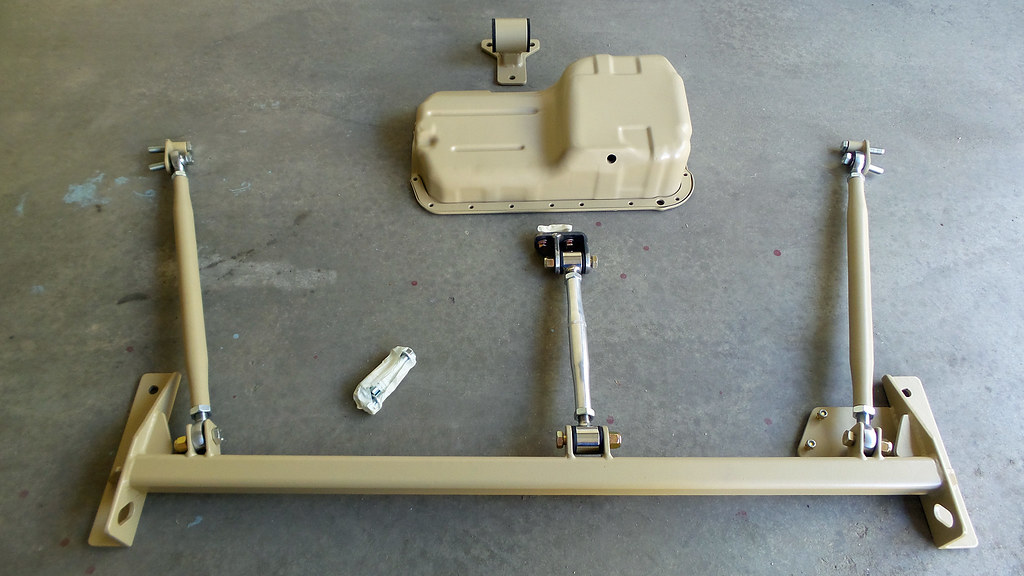 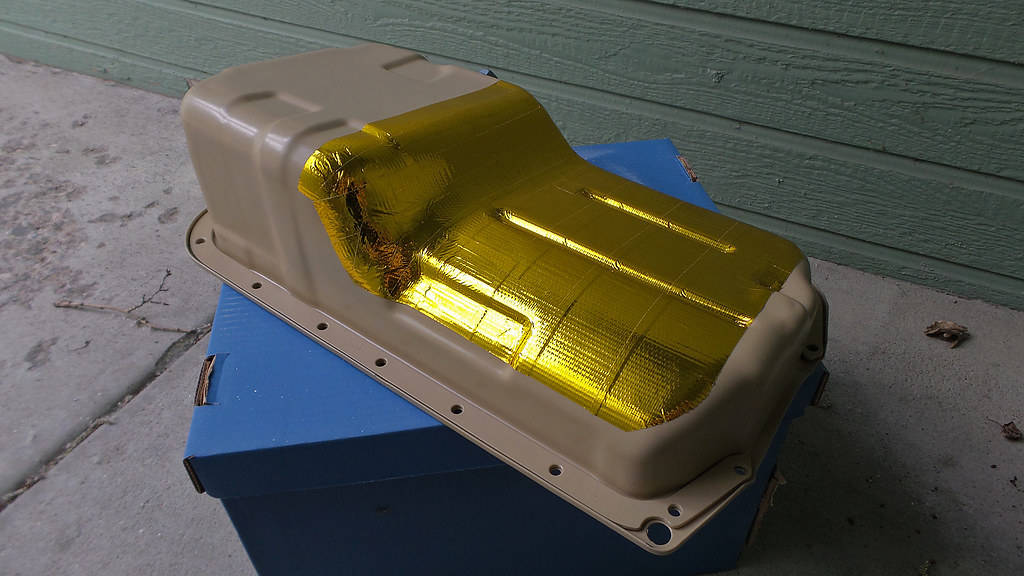 Joined Oct 27, 2007
·
289 Posts
Cyborg - were you able to avoid the SRS light on the 05/06 cloth swap? I had read some things about it, but wasn't able to remove the OPDS unit from the side of the passenger seat to swap. I believe it's that and the original seat belt tensioners that you need to avoid the light, from what I've read anyways.

It's on my list of things to do, but curious how yours went. The wiring under my passenger seat was significantly different from my 04 to the 05/06.

Car looks awesome by the way! Keep it up! :hb:

Joined Sep 26, 2012
·
1,875 Posts
I just went ahead and switched over all of the electronics, including even the airbags, since it's my only way to work right now and I didn't want to get hung up trying to figure it out. Didn't have a light come on.

Joined Aug 26, 2011
·
1,174 Posts
Forgive my ignorance, but what's the difference between the seats, well leather to cloth aside?

Joined Sep 26, 2012
·
1,875 Posts
Better cushioning. The most obvious visible differences being in the head rest and the front edge of the bottom where your legs go off. I had my friend sit in the car and he's like, "yeah, much more fat boy friendly." Getting used to them, they do actually feel a bit more comfortable now (I'm 5'10 140lbs, fwiw). I still need to take them on a long drive for that ultimate tailbone test, though.

Doesn't Give A F*ck