All show and no go... my daily | Bonus: old school(ish) Accord wagon build

Since my last update...

Around New Years, the original radiator started leaking from cracks in the plastic along the top. I would have liked to get an OEM replacement, but didn't have the time to wait for it to ship. New cap, hoses, thermostat, and Honda fluid. 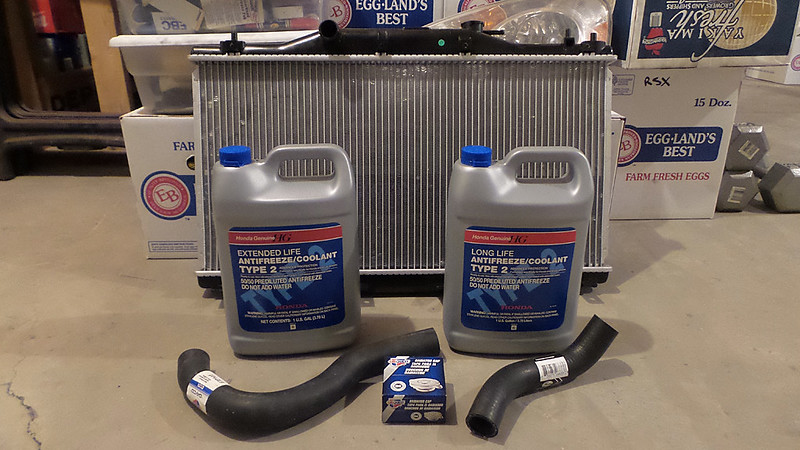 One of my tires on the 17s developed a bubble. They were all too low on tread to replace just the one, and I couldn't afford new tires at the time, so I rode on my 16s with snow tires for a few months. 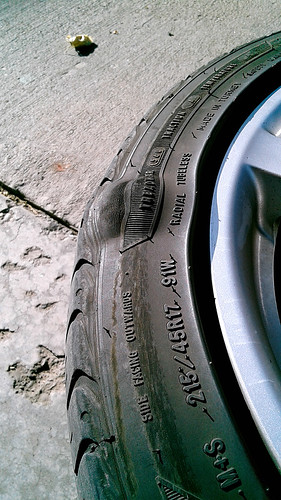 The clear coat on my hood really started going to shit, so I thought I'd sand it down and re-clear it myself. 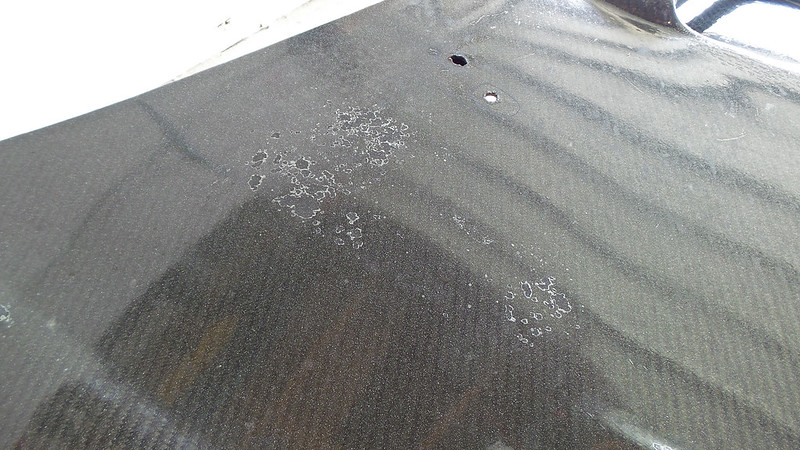 All that time spent sanding let my mind go wandering, and I ended up making a stupid decision. I've been getting really good with rattle cans, and didn't care that much about this crappy hood looking absolutely perfect, so I dug out the spare Desert Silver-coded cans I had laying around. But I forgot that Automotive Touchup's nozzles are shit, and they sprayed little droplets all over the hood. Metallic paint being semi-transparent, there was no way to fix that with the materials I had, so I sanded it back down to primer, ending up with this carbon-camo looking finish, and sprayed lacquer over it. I tried taking it to a shop to paint it for me, but everyone wanted $600 for the job. Like I said, this particular hood is just not worth that much to me, with its awful weave and poor fitment (Carbon Creations; stay away). At least the finish is nice now, though. :dontknow: 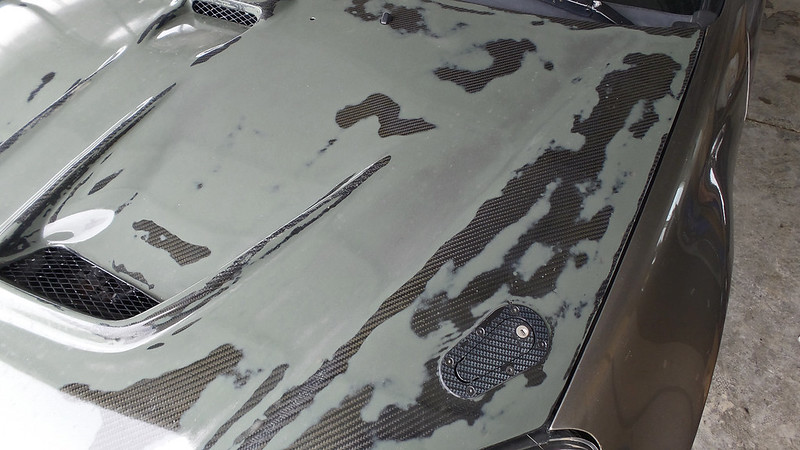 A couple days ago the car ticked past 250,000 miles, and this last month or so I've been working on maintenance stuff. 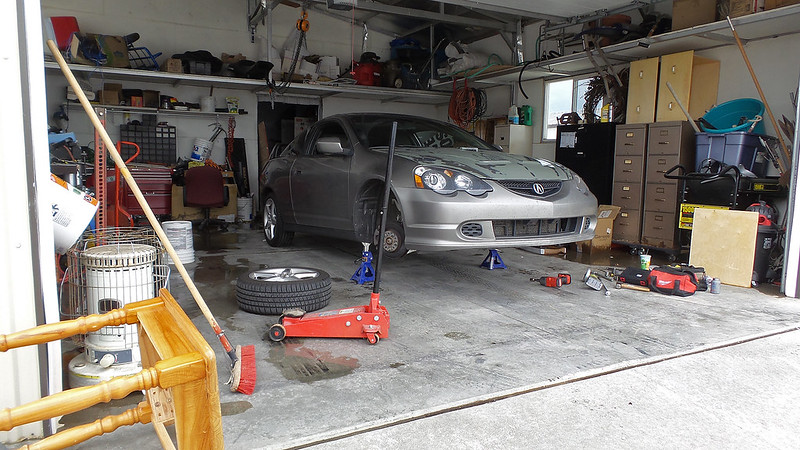 I'm slightly embarrassed to admit that I've been driving around on one corner of polyurethane bushings for a while. The day I did the front-right, I went to do the front-left and the ball joint stud was seized into the control arm. I needed to get to work, so I gave it up for another day. I went back to it probably a month later with better tools and still couldn't get it to budge. And now finally, a friend just took a grinder to it, since I was replacing the whole arm anyway. 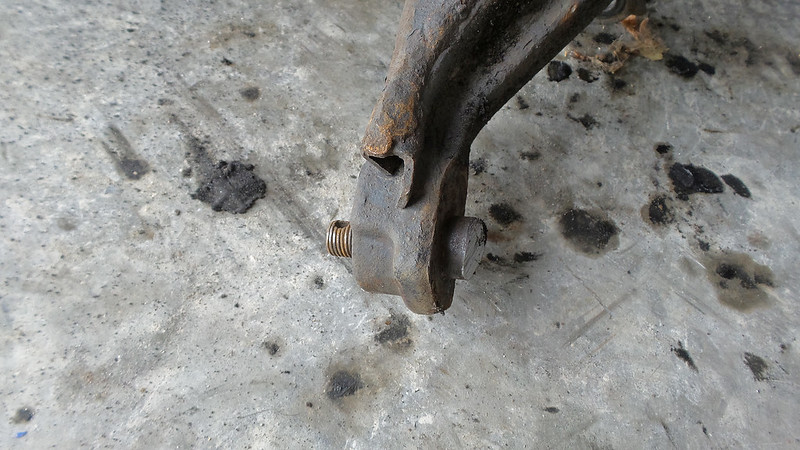 Front end urethane is finally done, as well as a new ball joint of course - now that that squeak is gone, I'm noticing the other LBJ is on its way out. For the rear, I'm wanting to rebuild the whole knuckle setup at the same time, with new wheel bearings and a proper powder coat job (front LCAs are spray painted), so I don't have to take it apart again later. 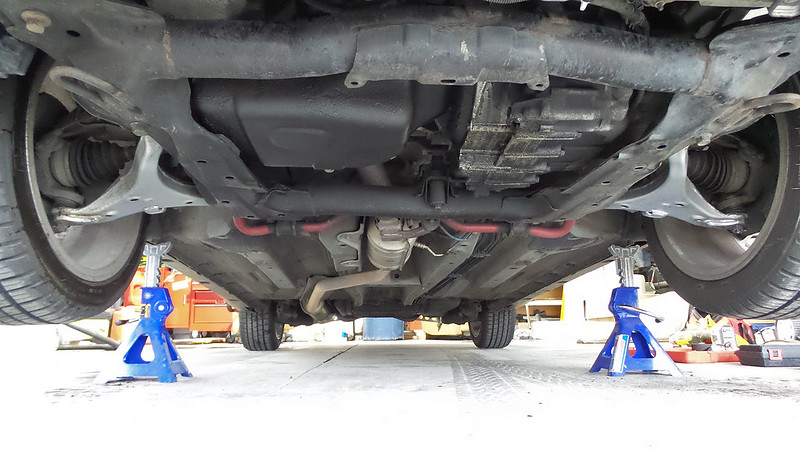 Got new all-seasons for the 17s around the same time: 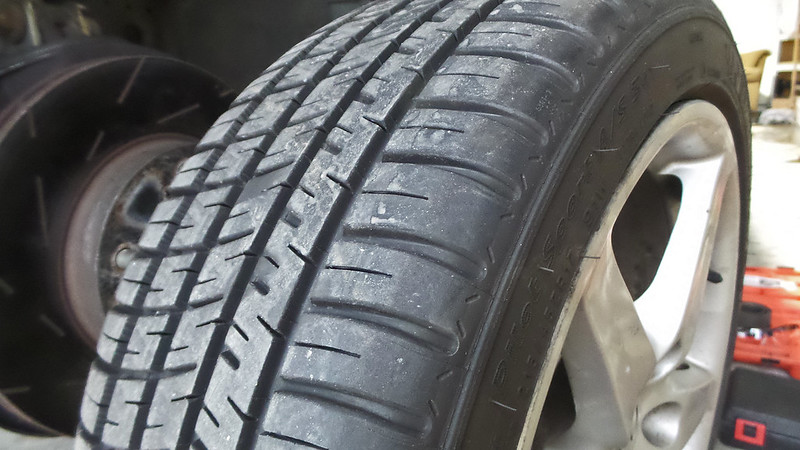 I just got a new serpentine belt and OEM tensioner assembly, so that'll be done here soon. The car also badly needs an exterior detail, but I'm living with a friend in another city from where I work for another month and the commute is beating the hell out of the car. So that'll have to wait until just before I move into my new place. I feel a brake job coming soon as well.


Random project: made a clock out of a junkyard rotor. 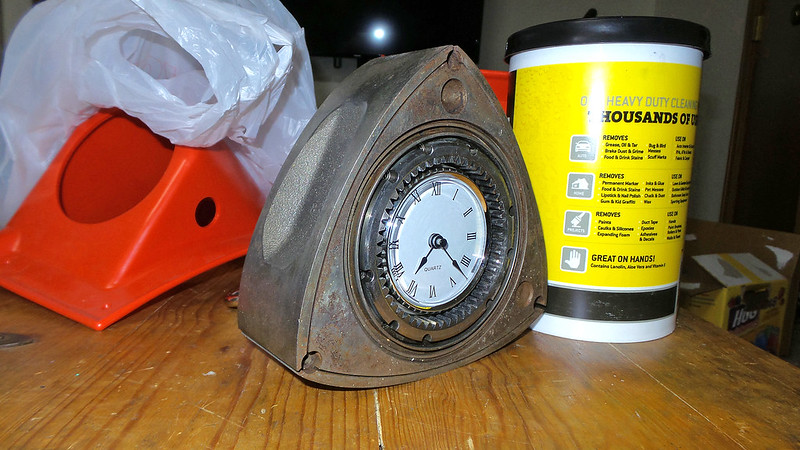 The Accord build is also about to see a ton of progress between now and Spring; I'm now on the hunt for a clean wagon. One huge benefit to this is that a second car means I can put the RSX down for trickier maintenance without worrying about my ride to work.

Got that new OEM tensioner on, as well as the correct sized belt (Bando; I believe they're the OEM supplier, since the tensioner has Bando stamped on it) that won't wear this one out: 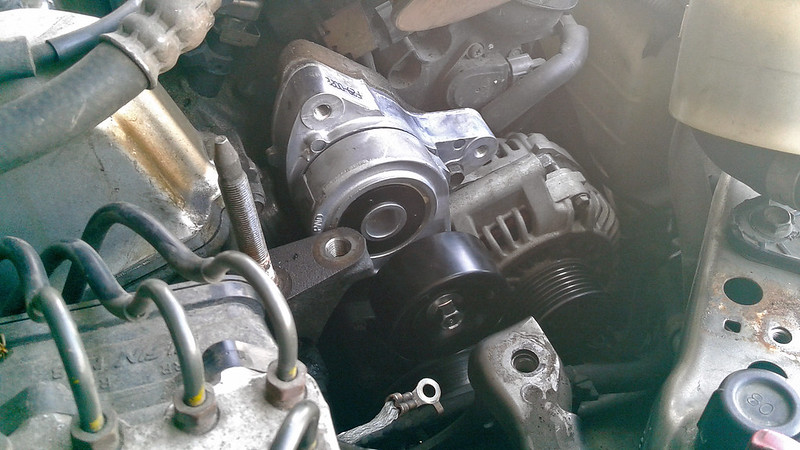 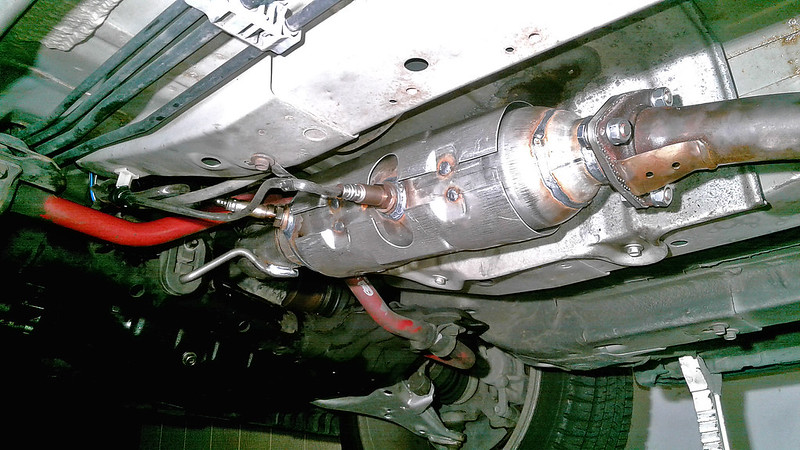 Not worth photographing, but my blower motor stopped coming on. So with the weather turning cold I'll be headed to the junkyard tomorrow morning to grab a transistor pack out of a TL (same part number in the '04-'08s). If that fixes it, I'll order a brand new OEM part that should last the next quarter-million miles.

Joined Sep 26, 2012
·
1,875 Posts
I'm not sure if they're actually doing anything, but if they are they're getting plenty of exercise in the mountains! :fistbump:

Joined Sep 26, 2012
·
1,875 Posts
Slowly picking away at my 'factory two-tone' idea, I finally pulled the '05-'06 rear seats I've had out of storage and installed them - you can see they need another vacuuming, but you get the idea. The Titanium center tray piece was bought new from Acura since I've owned this car, and I'm experimenting with it on the black cloth. I'm actually liking it. Especially after being used to the Titanium seats, I like that when I turn my head around to look back while reversing, the rear seats almost disappear now (my windows are all tinted to 20%, so it's fairly dark back there), making the car feel a bit more like a two-seater. More black pieces will be coming in the future, of course. I'm just trying to think it through carefully as I go along. At the moment, I'm thinking the final product will be a mostly black interior with Titanium accents - both center consoles and all seat belts, for example; and probably all black plastics with Titanium leather inserts on the doors. I do already have black carpet installed, both in the cab and in the trunk. We'll see how this ends up... 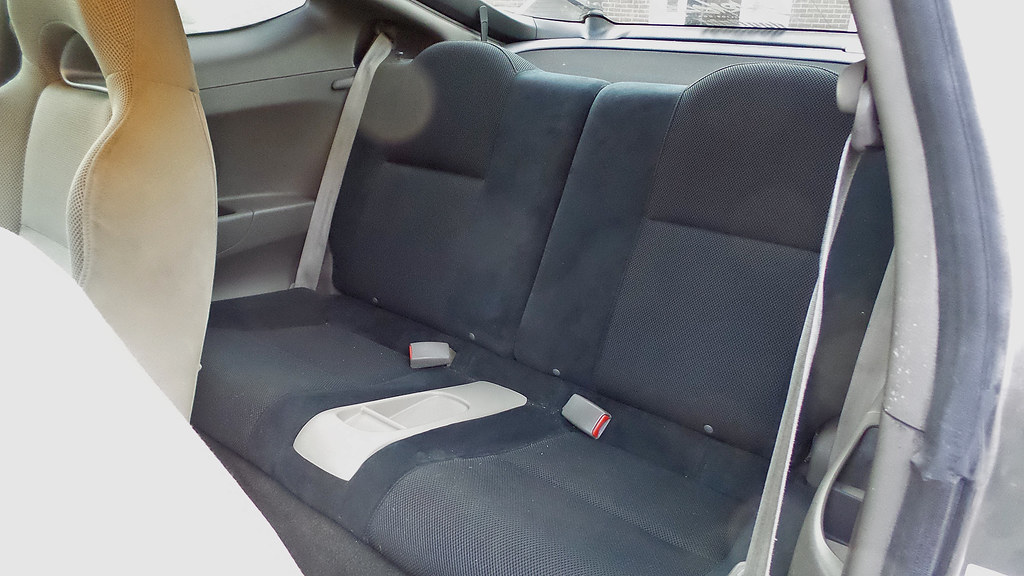 Just noticed the lower section of the center tray is exactly big enough for my smart phone to lay flat in and be supported by the sides. Forward thinking on Acura's part? I remember back in '02, having the smallest phone possible was all the rage. Those were the days.

Just hit 260,000 miles. Brake pads needed replacing, which got me to finally installing the Goodridge lines I'd had sitting around forever. Pads are the new Hawk HPS 5.0s, which replace the standard HPS. One problem I had with the old HPSs was that they sucked for the first couple of stops. The 5.0s grab great from cold. Love 'em. I'm also trying out EBC's BSD rotors. The slots are bigger than the EBC USRs that I had on before, so I'm worried these might tear through the pads more quickly, so we'll see how that goes. I'm definitely not going back to solid-faced rotors, though. As much as I drive in the mountains, I do actually notice the cooling benefits. New DOT4 and caliper slider pins as well, I went all in with it. 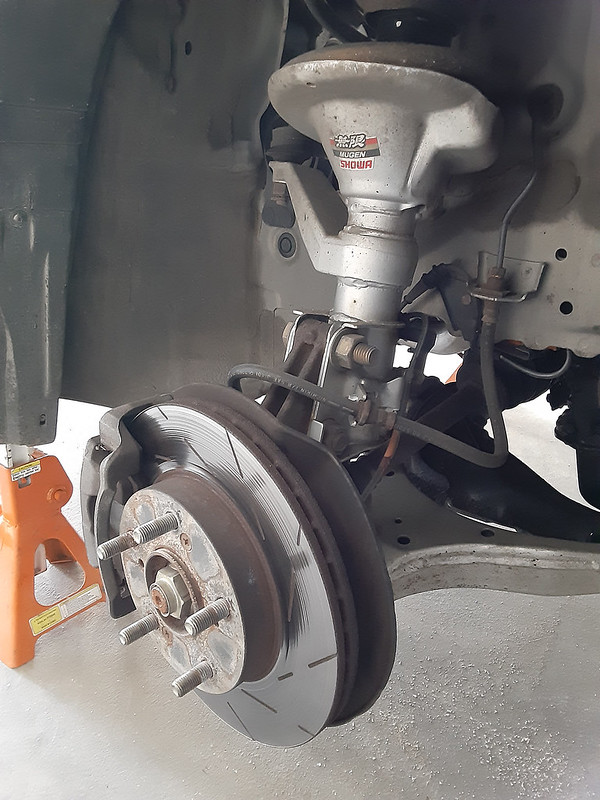 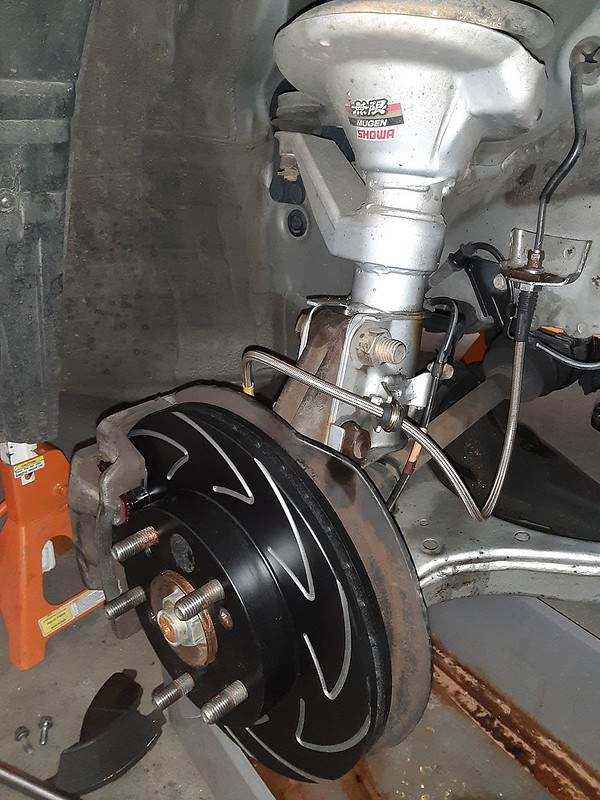 I think the next project with this car will be to replace the wheel bearings, which for me will also mean getting all the suspension arms powder coated, new lug studs and nuts... just freshen it all up. Maybe now that I'll have another car to drive, I'll get the subframe powder coated as well, and get some Spoon rigid collars.

As I posted in the Your Car Now thread, I finally bought the chassis for my H22. It's a '93 Accord EX wagon. While they could be had with a factory 5-speed manual, this one's going to need a conversion. But it seems to be rust free, which is was the main thing I was looking for - my RSX is actually starting to develop quarter panel rust, which I need to do something about once it gets warm. The wagon needs some cosmetic restoration, but these are so common in junkyards that's a non-issue. Luckily a lot of sedan parts fit the wagons, so things like the bulky side moldings and front bumper can be swapped out for subtler pieces. I've also got parts I kept from my old sedan, like JDM one-piece headlights with TSX projector retrofit, JDM power folding mirrors, a Spoon-style front lip... and of course a bad ass engine to go in it. A lot will be happening between now and summer. These cars look pretty sick when they're done up right, so I'm so excited for this, especially with how slow the RSX base is. Shooting for stock Evo/STi power with an all-motor H22, and the wagon weighs about the same as those cars. 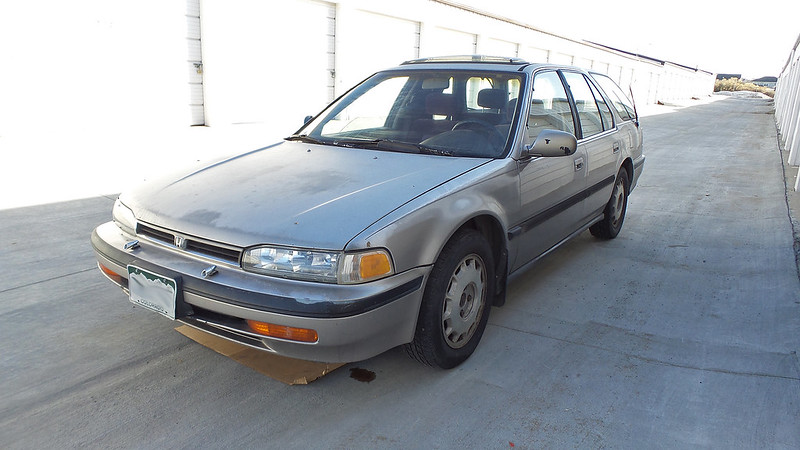 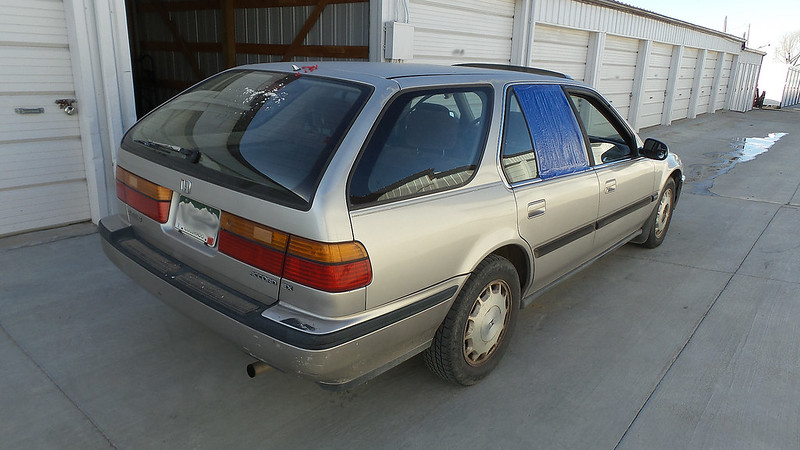 Been ordering parts like crazy for this thing. The money's there, it's getting done quick. This thread will be full of Accord content soon enough, haha. That's an Exedy stage 1 clutch and Competition 11.56 lb flywheel. I'm not sure what an RSX-S flywheel weighs, but an Accord/Prelude flywheel is something like 20-22 pounds. 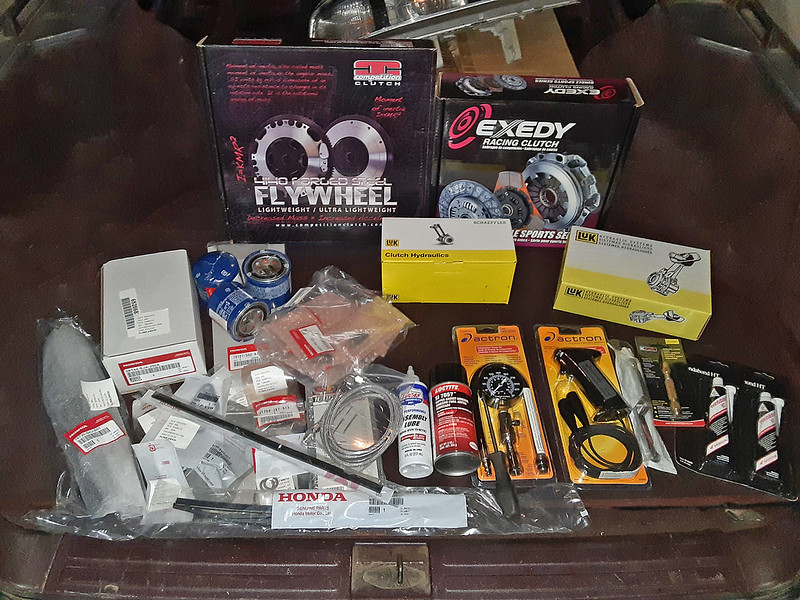